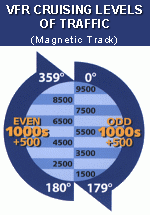 It is important that you know the cruising levels of traffic with respect to how other aircraft operate in airspace. Although you will rarely fly a balloon at a predefined altitude aeroplanes and helicopters do generally operate at predetermined cruising levels based on their category of operation (VFR or IFR) and the direction that they are travelling in. The purpose of this is to provide a level of automatic vertical separation for aircraft that could be on collision courses at high closing speeds. The rule is known as the hemispherical rule.

Knowledge of this this will assist you in knowing what levels an aircraft that is approaching your flight area is likely to be cruising at.

There is a neumonic ‘NOSE’ to assist you in remembering this information.

Aircraft that are flying on a magnetic track from North – 000o through to 179o should be flying at Odd thousands of feet;

Aircraft that are flying on a magnetic track from South – 180o through to 359o should be flying at Even thousands of feet.

There are some exceptions to this rule: ENR 1.7 Paragraph 3.1.3 provides for VFR aircraft operating outside of controlled airspace to operate at random levels and aircraft on climb or descent may not be at a hemisperical level.

Back to COPB Exam Help Index

I just wanted to let you know that we had a wonderful balloon flight last Friday and we were very impressed with the whole experience. We have already recommended your company to our friends. Once again, thank you for a wonderful experience.

Jay and  and Tony were excellent hosts, we really enjoyed the whole time.