Australia uses a unique (by world standards) airspace classification system although it has become largely aligned with the system used in the USA over recent years. There are four ICAO standard airspace classes (A, C, D, E), plus one uniquely Australian class (GAAP) of controlled airspace used in Australia. The special GAAP class of airspace which is currently used at the major, captial city general aviation aerodromes is scheduled to change to the ICAO standard Class D during 2010. The classes of airspace differ in that they have different operational requirements and / or operational restrictions.

Class C surrounds major city airports starting at ground level and stepped up into mid-level Class C or the high-level Class A airspace. The control area steps above Class D aerodromes is also classified Class C as is airspace within radar coverage south of Sydney between FL125 and FL180. Military restricted areas at or below FL285 are classified as Class C whilst they are active.

IFR and VFR flights are permitted within Class C, VFR flights are limited to 250 kts indicated airspeed below 10,000 feet AMSL. (If you are a balloon pilot this will hopefully never be an issue for you). Air traffic services are required to provide separation between IFR and IFR and IFR and VFR traffic. Traffic information and traffic avoidance advice is provided for VFR to VFR traffic but a separation service is not.Clearance is required by all aircraft operating in Class C.

Class D airspace is used around the non-capital city controlled aerodromes. Protected airspace in the form of Class C steps are provided above Class D to allow high speed and heavy traffic to remain inside controlled airspace whilst arriving and departing the Class D area.

Class G is uncontrolled airspace and accounts for the majority of Australian airspace. There is no separation service provided to any aircraft operating in Class G but a flight information service is provided to IFR traffic and flight information and radar information services and flight following is provided on request to VFR flights.Speed is restircted to below 250 kts for all aircraft below 10,000 feet AMSL whilst within Class G. CLass G is the only airspace category in which ‘no radio’ flights may be conducted but these are restricted to below 5,000 feet AMSL, away from aerodromes that require the use of radio and in weather conditions than meet the standard VMC criteria.

Within Class G, uncontrolled airspace some aerodromes operate a Common Traffic Advisory Frequency (CTAF) which imposes a requirement for radio to be carried and used but does not affect the operational services or requirements provided by air traffic services.

GAAP airspace is uniquely Australian! The major capital city general aviation aerodrome aerodromes are currently classified GAAP but these are in the process of changing to Class D. In GAAP airspace IFR aircraft are provided a separation service when IMC conditions exist, and a special VFR to special VFR separation service is provided when visibility is less than VMC. An air traffic control serice is provided for take-off and landing.

There are three general airspace design models used in Australia. There is one for use of the majority of the country where there is no radar coverage and two for use along the east and south east fringes of the country where there is radar coverage because a high percentage of the air traffic operates in those areas. Different models are used in the north and south because of the differing type of air traffic in those areas. From Sydney north, because of the larger distances that are generally flown there are comparitively few high performance piston engine aircraft used for commuter Regular Public Transport (RPT) operations so there is less traffic operating in the 8,000 – 10,000 foot altitude range. This means that there isn’t sufficient demand for seperation services between instrument flight rules (IFR) and visual flight rules (VFR) traffic to warrant Class C airspace below the flight levels. In the southern part of Australia there is still quite a lot of short haul commuter aircraft operate between 8,000 and 10,000 feet so Class C is provided. 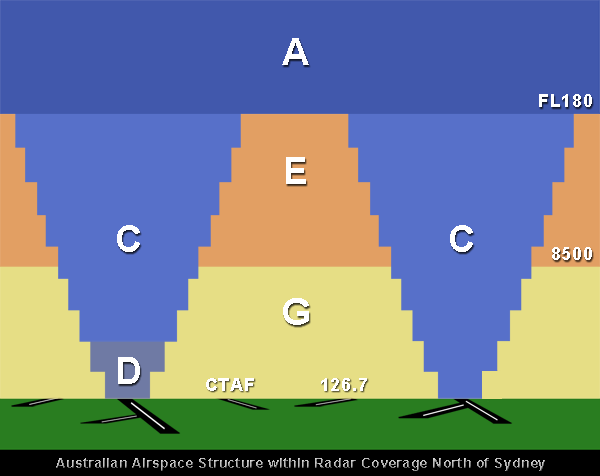 Airspace categories and their lateral and vertical limits are depicted on ERC-L, ERC-H, TAC and VTC charts. Each chart has a legend which gives specific information about the way information is depicted on the chart.

Wow how big were the balloons, very impressive, as was the guys flying and driving us.

Thank you for organising that for me, I really appreciate it. This is the third hot air balloon flight from your company that we have given as a prize and I am sure there will be many more. Thanks for the great service, it seems to be very rare these days.

Appreciate the effort in making the ballooning wish come true. In fact, it was meant as a 21st birthday wish for Pika who had been yearning to go on the balloon ride since two years ago! By the way. I thought you might wanna know why I chose your company for the ballooning. The main END_OF_DOCUMENT_TOKEN_TO_BE_REPLACED