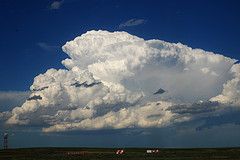 Flight through or near thunderstorms should be avoided!

For thunderstorms to be created there needs to be:

Strong turbulence and wind changes can be evident at significant distances, up to 100 km from a thunderstorm so it is unwise to fly a balloon at any time when TS are forecast near by. Up and down draughts exist within the whole storm area with up draughts being most common during the formative stages and down draughts most common in the dissipating stage of a storm. Downdraughts tend to be strongest under the base of the storm and can have vertical wind speeds of several thousand feet per minute. The strongest updraughts are usually found in the mid levels inside the storm cell.

The ‘first gust’ at the leading edge of a storm is often very strong because it is the sum of a downdraft from the storm which is being pushed along by the movement of the storm.

Low level wind shear and significant changes in lift often accompany the gust front because of a change in rapid change in air density.

Further information about the formation and conditions associated with thunderstorms can be found in Bob Tait’s book CPL Meteorology in Topic 6 Meteorological Hazards.

Wonderful morning last Saturday, we had just the best time.

Just wanted to drop you a line to say thank you for a really wonderful ballooning experience. Everything went perfectly from beginning to end. We had a great time!