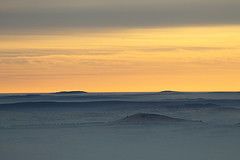 When climbing towards an inversion from below the top of the balloon will encounter the warmer air mass and create less lift because there is now less difference between the temperature inside the balloon when compared to outside the balloon. As a result of the reduction in lift the balloon’s ascent rate will reduce.

When descending through an inversion layer from above the balloon will encounter cooler air below the inversion and create more lift because there is now a greater difference between the temperature inside the balloon when compared to outside the balloon. As a result of the increase in lift the balloon’s descent rate will reduce.

There can also be winshear and false lift associated with temperature inversions.