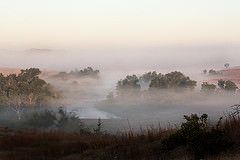 Fog is defined as a concentrated suspension of very small water droplets causing the ground level visibility of less than 1000 meters. Fog is cloud which forms at ground level.

When more than 10 nautical miles from an aerodrome with a published instrument approach balloons are permitted to operate with visibility down to 100 metres whilst they are operating at low level (below 500 ft). Fog however is still of operational significance to balloonists.

Radiation fog is the most common form of fog found in Australia. Radiation fog forms overnight, often just prior to, or at sunrise. It is formed when moist air is cooled below its dew point by contract with a cold land surface that is losing heat by radiation. Conditions for fog in this state to form require clear skies at night, light winds (usually less than 5 knots) and humid air. Conversely fog will dissipate if there is an increase in wind speed above about 5 knots and with an increase in solar heating.

Advection fog is formed when warm moist air, generally from over water moves over a cool land mass and cools sufficiently to become saturated.

I just wanted to let you know that we had a wonderful balloon flight last Friday and we were very impressed with the whole experience. We have already recommended your company to our friends. Once again, thank you for a wonderful experience.

We had a great time, Thanks for the experience, I will definitely recommend it to my friends! :-)

I wanted to thank you so much for the wonderful experience flying with fly me to the moon last Monday - Lisa and I had a wonderful time, we will treasure that memory with her forever.