Climbing Brisbane’s Story Bridge is undoubtedly one of the most exciting adventures to do that you will never regret nor forget. The bridge has now reached its seventieth birthday but is still as strong as ever and is not only known as Brisbane’s iconic landmark but also as the mainstay of Brisbane economy during the time of the Great Depression. Today, this heritage listed steel cantilever bridge across the Brisbane River is a main source for transport of cars, trucks, bicycle, and pedestrian traffic between the Brisbane suburbs of the north and south. From the top of the bridge the view is spectacular as you take in Moreton Bay in the east and then see westwards across the Scenic Rim. 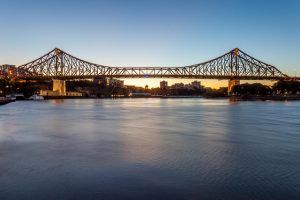 The actual climb is a two and a half hour adventure climbing up the superstructure of the bridge to the top eighty metre’s up. The view of the city from so high is amazing, and everything below, especially cars, appear so small. This experience is only one of three such possible climbs in the world and completely safe as you are fitted with the necessary safety equipment prior to commencement of the climb, together with a commentary of the bridge’s history, of the city and of the area surrounding..

What is supplied before your climb

Everything necessary for your safety and sun protection is supplied. This includes hats, sunglass lanyards, rain resistant jackets, handkerchiefs and sunscreen. Climbers are requested to arrive at least fifteen minutes prior to climb time in order to sign an indemnity form and to take a breathalyzer test, because you cannot drink and climb. After that you have a thirty minute safety induction. Should you have a fear of heights chat to the Climb Leaders who are especially trained for handling anyone nervous and guiding them to overcome their fear of heights. Once you have finished being briefed you are attached to the static line that keeps you connected to the bridge all the time of your climb. Now you are ready to begin climbing Brisbane’s Story Bridge

History of the Story Bridge

John Bradfield designed the bridge in 1934, with building beginning on 25th May, 1935. While under construction it was known as the Jubilee Bridge in honour of His Majesty GeorgeV. To complete it took five years and was Australian in design and construction as well as the largest bridge in Australia. It was opened officially on 6th July,1940 and named the Story Bridge to honour the Public Service Commissioner, and member of the Bridge Board, John Douglas Story. Pneumatic pressurised chambers were used in the beginning of the bridge construction. First, the foundations had to be set for the construction of the piers for the bridge. This took place in the latter part of 1935 and continued until the middle of 1936. They had to support the great weight of 12,000 tonnes of steel framework that eventually was going to rest on top of them. The result is they have stood the test of time and have turned out to be a great climbing adventure and attraction for Brisbane.