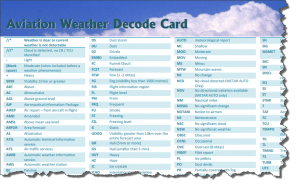 AIP GEN 3.5 Section 18 gives specific information regarding area forecasts for use below FL200.

Some important points to note include :

We have an aviation weather decode card available for download which can be used as a quick reference guide for interpreting aviation weather reports including ARFOR, TAF, METAR, SPECI and SIGMET.

The whole experience was most enjoyable. Professional and friendly staff. The Pilot was knowledgeable and confident.